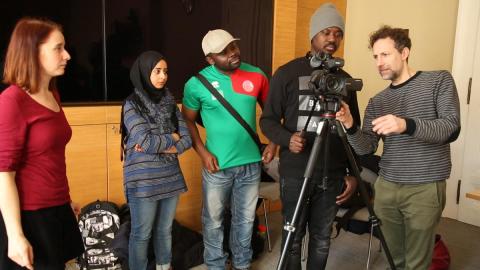 This January and February, twelve students from such diverse countries as Cameroon, Yemen, and Iran gathered together at CEU Library’s Mirabaud Media Lab to receive training on using film to share their personal stories. The attendees were participants in CEU’s OLIve Weekend Program, an initiative providing free weekend courses to registered refugees and asylum seekers in Hungary.

Co-taught by CEU Media and Visual Education Specialist, Jeremy Braverman, and documentary filmmaker Klara Trencsenyi, with help from theater director Adam Bethlenfalvy, the participatory training focused on basic camera controls and shaping a film’s narrative. "With the proliferation of platforms for moving images, the ability to communicate through video is a basic skill that has become ever more important. The OLIve program participants have such important and unique stories to share. We wanted to offer them some basic training so they can more effectively capture and express their own stories visually,” said Braverman.

Over the course of four sessions, the workshop participants studied impactful short films, received technical instruction on operating a video camera, and conducted short filming exercises in and around CEU. “The OLIve students were very motivated. Each week they captured beautiful visuals and made short engaging photo essays about their lives,” explained Trencsenyi.

Planning is underway for additional trainings later this spring to teach the students editing skills and to edit their final films. "I think their films will be really powerful examples of community filmmaking, a newer concept for Hungarian audiences and the Hungarian film industry,” added Trencsenyi. Community films are created by local communities, often in collaboration with a professional filmmaker. They are characterized by the active, rather than passive, participation of the film’s subjects in the development of the film and its narrative.